Hello everyone! It is a brand-new month and that means it’s time to update you on the progress of A.R. Dragonfly!

First off, I want to say that I made a liar out of myself. In my last update, I said that I had plotted out Volume 5 and that I shouldn’t write it because I would get a bit too far ahead of myself. Well, I did start writing it… and I’m currently at 5 / 7 chapters in first draft!

So a lot of things have happened since the May update. First off, as you could see, Volume 3 of A.R. Dragonfly has released! This means the artwork on Volume 4 has also begun and I received the first sketch of the volume which will also be used as the cover photo. Say hello to the newest class in Blaze Auras: Reaver!! 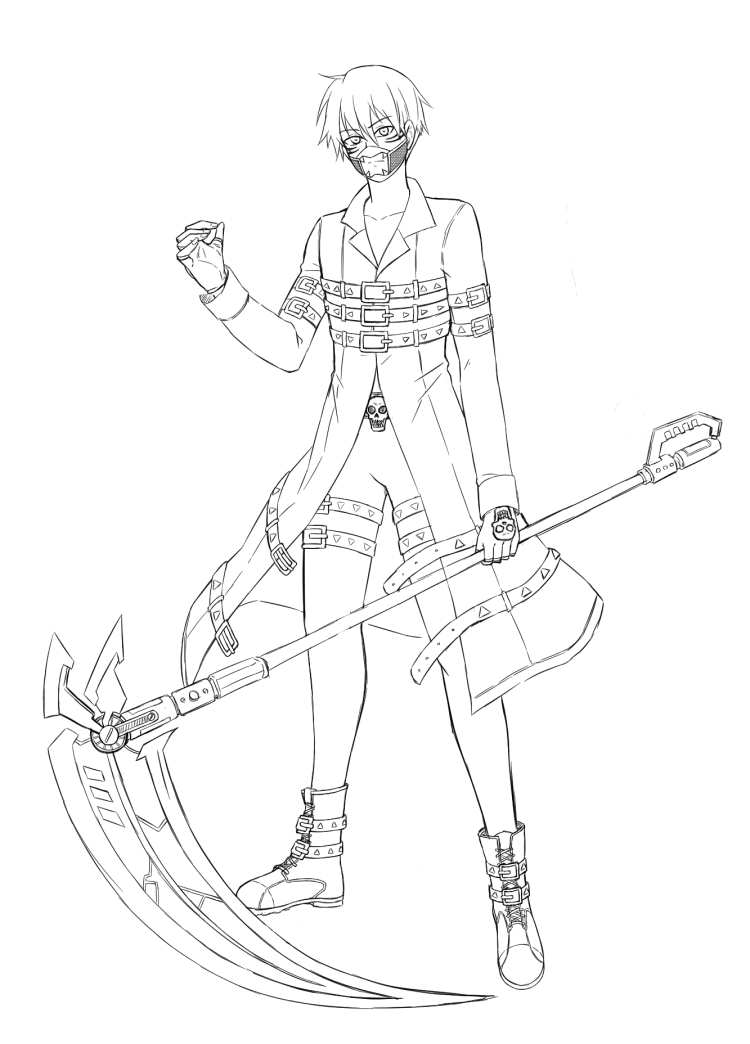 Now… here’s where I’m going to go into Volume 5 spoiler territory but I don’t mind spoiling this for one simple reason: This is 100% no longer happening at all in the story.

In Volume 4, I introduce Kaiza Shirazou. The name might sound familiar as he was previously introduced in Volume 2 as the 8th World-Ranked player in Blaze Auras that Amber soundly beats in the Legacy of Champions Tournament. In Volume 4, there is another tournament where Kaiza returns and has a chip on his shoulder. I won’t go further because that’s still part of the story but in Volume 5, he was supposed to master the new Reaver class and combine him with the Arcanist to create one of the most powerful class combinations ever in Blaze Auras.

From there, the volume was supposed to end with Kaiza knocking both Amber and Kaito off of their top spots and claiming the #1 rank in Blaze Auras, thus finally getting his wish of people knowing his name.

Ever since I came up with that ending for Volume 5, it bothered me. I felt that everything was a weak build up and the ending was a rather moot point. Not only that, it was repeating the same thing that happened with Amber and Kaito back in Volume 1. Needless to say, I was unsatisfied with it and wanted it to change but I had trouble thinking HOW I wanted it to change. Then, I had finished Chapter 5 of Volume 5 and realized that Chapters 6 and 7 were going to set up this ending. Then, it hit me. Not only was Kaiza a really weak new antagonist and needed a revamp, but I realized WHY he was so weak. He was more of a comedic relief that no one took seriously. I went back to work and came up with a brand-new ending to Volume 5.

To say that Volume 5 will end on a note that will cause you to hold your breath, it means I’ll be going back to Volume 4 to rewrite a lot of Kaiza’s dialogue to set up the eventual ending to Volume 5. This one change to the ending, completely rewrites what I had planned for Volume 6 but that’s a good thing because I think Volume 6 just got ten times better as a result… plus the core story of the series not only stays intact but it actually enhances it! Needless to say, I am REALLY excited to write this out then go back and build up to this new ending!

Another thing I want to mention is that I’ve taken the criticisms against my series to heart. One thing that was a running theme with each review is that A.R. Dragonfly was a good “quick” read. Quick was the keyword there and while it was intended to be that way, the amount of positive feedback I’ve received said that readers wanted more. Even unpublished feedback from some friends stated that they were disappointed that it ended so quickly and they wanted more content. I took this to heart and starting with volume 4, I will be fixing that.

Let’s take a look at the TOTAL amount of pages for each volume for a second (includes title pages, main story content, table of contents, extras, bonus chapters, etc).

Here is where I am at with Volumes 4 and 5. These totals do NOT include anything except the main story. No title pages, no art pages, no extras, nothing. Just the raw story itself.

Another criticism is that some of the matches in Blaze Auras feel a little too short. This was by design because the game is supposed to be a knee-jerk-reaction style game where matches are quick. Because of the EXP grind that the game employs, in order to feel a sense of progression, matches need to be quick so players can move onto the next challenge. This was all intended because this was a reference to the short attention span of today’s society as a whole and how people constantly need new content in quick, short bursts in order to hold their attention.

Despite my intention to write a game based around a collective mindset in today’s gaming industry, it had the opposite effect on readers. People have craved longer matches and while Volume 4 doesn’t really rectify that, I compromised in Volume 5. There is a certain match in Blaze Auras that happens in Volume 5 and I’m happy to say that it takes up about 70% of a 32.6-page chapter!

While all of this might sound good to those who want more content… it has me wondering if I should be increasing the price of my autographed copies. I’ve printed a 320-page book before and I can tell you the $9.99 price tag is still fine to cover Amazon’s printing costs and cut of the profits; however, the cost of printing a book that size is almost double that of what it costs to print volumes at the previous sizes. This means in order to cover the cost of printing, the cost of Amazon shipping the books to me, and the cost of shipping the books out after signing them (thanks to USPS increasing their shipping prices), it would end up bumping the cost of an autographed copy from $15 to $25.

It’ll be around $4.50 to print a book, about $5.00 per book to ship, and it’s now between $8-$11 to ship through USPS. So that puts the cost of an autographed copy anywhere between $17.50 – $20.50. Which means in order to make a decent royalty off of it, I would have to charge $25 for a signed copy. For well-established authors, this wouldn’t be a problem but I’m not a well-established author.

This means I have to wonder if people are cool with the $10 hike or just not do autographed copies anymore and have people get their $10 copy off of Amazon. It’s certainly a bridge that will need to be crossed when we get there but the good news is that, for anyone who strictly buys my books off of Amazon, the increased content will not affect you in any way, shape, or form!

Anywho, what is next for me?

Well, I want to finish the first draft of Volume 5 while these ideas are fresh in my head. Then, it’ll be time to go back and do all of the editing in Volume 4. It’ll also be time to write History of Nara Part IV which, by the way, will be the conclusion to the Blaze Auras side story. Do not fret as I have some nice bonus chapter content planned for all future volumes… some of which poking fun at other real-life series, or some stuff that breaks the 4th wall! I even have a Final Hope x A.R. Dragonfly crossover chapter planned! I also have an A.R. Dragonfly x Shadow Wing chapter planned where it’ll give you glimpse into my next light novel series after A.R. Dragonfly ends (if it ever does lol)

All bonus chapters after Volume 4 are non-canon. This means I can go wild without worrying about spoiling or damaging the main story!

That’s going to do it for this month’s update! Since this update is coming early in the month (Day One Patch, baby!), I’ll provide more updates throughout the month should any artwork get completed! I also predict that by the next update, I would have Volume 6’s bullet points fleshed out as well so look forward to that!

P.S. I was totes listening to this the entire time I was writing this post.