Another month has come and gone and it’s now time for your May progress update on A.R. Dragonfly!

Last time I provided an update, I was still in the middle of doing a final pass of Volume 3. Now, I am happy to announce that Volume 3 is completed minus the last two pieces of artwork! As I type this message, I received the base color proof for Versaithe, one of the characters from Blaze Auras. I am waiting on the artist to do all of the shading, highlights, etc to finish that off. I don’t really want to show the base color because I am having him make some edits to it but I will show off the sketch so you can see for yourselves just what Versaithe looks like! 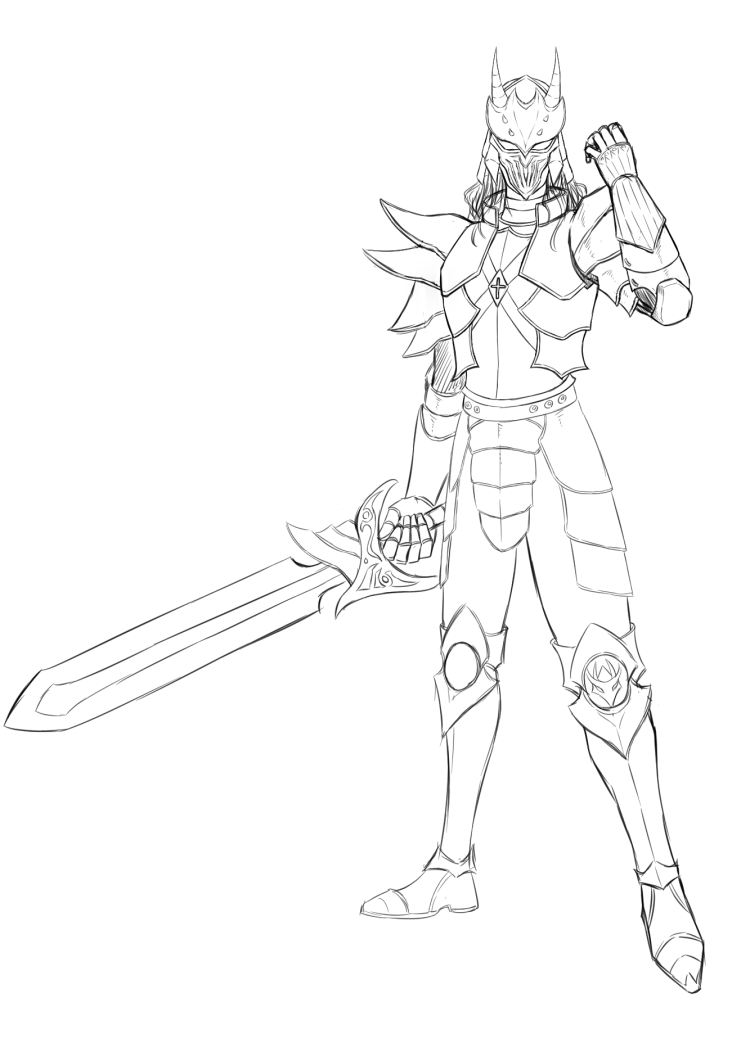 As for the writing aspect, with Volume 3 completed, I worked on editing Volume 4! The main portion of the story is now in second draft and all of the character artwork concepts have been created! There will be 11 pieces of new artwork this time around but there will actually be 12 pieces of art in total. The 12th piece is Daniel McDevitt which was slated to be released in Volume 2 but my artist missed the deadline. Thankfully, Daniel returns in Volume 4 so I can use his art piece there!

This means our cast is growing even bigger! Since I like having small, unimportant characters sprinkled throughout the book, only to have them become important later, I will be introducing, yet, another character in Volume 5. Her name will be Jessi and if you’ve read the first two volumes, you haven’t had the pleasure of meeting her yet; however, she will be in Volume 3 somewhere. Just make a mental note because she will enter the fray in Volume 5, thus expanding our cast even more!

Speaking of future content, while A.R. Dragonfly is in a place of limbo (i.e. one volume completed, next volume edited) I took the liberty of plotting out the entirety of Volume 5 so that means I can start writing it as soon as Volume 3 launches. I COULD start writing it now but I don’t want to get super far ahead of myself. Patience is something I am trying to teach myself.

When I plotted out Volume 5, I began to think about the future of the series. I have some big plot points for future volumes but my question was “What lies beyond this?” So, I sat down and thought about what would happen after A.R. Dragonfly’s biggest and defining moment? Would the story end? Is there more to explore? The answer is no to the first question and yes to the second. Just because we reach a huge point that seems like the end game, there’s always New Game+, right?

That’s why I came up with plot points to flesh out the story even further. I didn’t want to add plot for the sake of extending it artificially, though. I really wanted this story to take shape and explore a lot of different aspects. I want to create this living, breathing world outside of Amber’s apartment, Things N’ Stuff, and now Kaito’s apartment. I want to explore much more than what I have, dive deeper into my characters, and tell a complete story.

The major point in A.R. Dragonfly may not be as major anymore. There’s going to be many more milestones and, needless to say, I came up with enough material to send this series into the double digits in terms of the number of volumes.

So that’s where we are at… a third volume ready to launch once the art is done, a fourth volume edited with art conceptualized, a fifth volume planned and ready to start writing, and the future mapped out with no end in sight STILL.

Lastly, before I kick it out of here, I want to say that the #IndieApril movement has truly been amazing on Twitter. I’ve met and interacted with so many great independent artists! I tried to do my part by, not only, plugging them here on my personal site but also on The Outerhaven, but I also picked up several original English light novels and reviewed them!

You can find my reviews of the following books below:

Journey of a Betrayed Hero Vol. 1 by Brandon Varnell
Global Divide: Ryu Rising Vol. 1 by Peter Rodriguez
Do You Want to Be Normal? by Koji Kojou
Help! My Little Sister is Disappearing! by Azure Whitewood

Thanks for reading and either later this month or in the June update, I might have something else to share. Something has been on my mind as of late and I want to see if there would be any interest in a rewards-based support system. I’m not entirely sure if I will go through with it but if I do, just as a hypothetical, what kind of rewards would you guys be interested in?

Early access to drafts? Credited in the book? Having your own minor character + dialogue line in a book? Early access to art/sketches before they’re announced? Something completely different?

Let me know what you would like to see and/or if I’m jumping the gun on something like this.

Until then, see you in the next update!