Mikomi Saigo is the 24-year old CEO of Onyx Technology Ventures, a technology company that invests in the future by innovating new technologies for businesses. On the cusp of creating an advanced artificial intelligence, Mikomi is shot in the parking lot of his company. Mikomi is about to die when he is suddenly transported 10 years into the past and placed into his 14-year old body with all of his memories intact. Mikomi uses his intelligence and knowledge of the world to unravel the mystery of who killed him. However, he cannot leave the world alone as-is. His desire is to change some of the more unpleasant memories from his life. 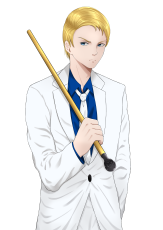 Sebastian is a custodian of time and the one responsible for transporting Mikomi 10 years into the past. Sebastian’s job is to watch over Mikomi all while maintaining balance within the timelines. In addition to being Mikomi’s guide, Sebastian acts like a mentor and even sympathizes with Mikomi from time to time. Armed with a quick wit and a dapper British accent, Sebastian only wants to see Mikomi’s journey through life to see if he can solve the mystery of his murder. 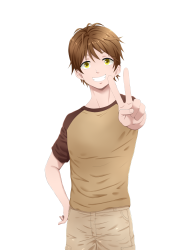 Ryan is Mikomi’s childhood friend. Ryan is as energetic as they come and he’s not afraid to cross boundaries that make people question his actions… such as his traditional morning tackle whenever he sees Mikomi. Ryan is the kind of person who takes things at face value and can often be swayed easily. This caused Ryan and Mikomi to have a falling out in the original timeline; however, that is one of the mistakes Mikomi looks to erase on his second journey through life. Besides, Ryan needs someone to buy him video games whenever he forgets that he never has enough money. 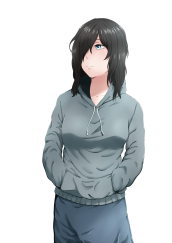 Serah is a quiet girl who doesn’t like to have a lot of attention drawn to her. She’d rather spend her time reading her favorite book as things such as social interaction and friendship are unneeded. Because of this, many around her label her as an outcast but the label doesn’t bother her all that much as she has grown accustomed to that lifestyle. All of that changes when Mikomi witnesses the ridicule she has to put up with on a daily basis. Little did Serah know that Mikomi was about to change her life forever.

They are Mikomi’s parents. Ryuunosuke looks like the stern father type; however, he’s very caring and proud of his son. He’s hard-working but seems to put work above family far too often. In the original timeline, Ryuunosuke is the CEO of Onyx Technology Ventures but dies of a heart attack due to overwork. This causes Mikomi to inherit the company from his father. One of Mikomi’s goals is to prevent his father’s death so he could have a caring father figure in his life.

Karoline is a loving and supportive mother with a happy-go-lucky attitude. She’s always willing to put family first over work, the direct opposite of her husband. Before becoming a housewife, Karoline was a photographer that was sent on an assignment to Japan where she met Ryuunosuke and, eventually, married him. The two of them relocated to America and started a family with Mikomi.